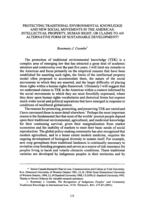 Abstract: The protection of traditional environmental knowledge (TEK) is a complex area of emerging law that has attracted a great deal of academic attention and controversy over the past five years. Rights with respect to TEK are only one dimension of the struggle for indigenous political autonomy in Mexico and elsewhere, but they are not insignificant. The Zapatista resistance to NAFTA and global neoliberalism is well known but just as important are peoples’ ongoing struggles in Chiapas for collective political autonomy and their assertion of rights to communal forms of rural subsistence framed in cultural terms as the right to maintain a distinctive indigenous identity. As Jung suggests with respect to the Zapatistas in Chiapas, these “cultural” assertions are not merely expressions of a need for recognition, nor attempts to safeguard traditional practices from the threat of modernity, but instead “…indigenous identity is the condition of participation in a global political dialogue” that insists upon a political voice for many of those who have been most marginalized and oppressed by modernity and asserts for this group the “right to have rights.”