The Knowledge Economy and its Cultures: Neoliberalism and Latin American Reterritorializations

The Knowledge Economy and its Cultures: Neoliberalism and Latin American Reterritorializations 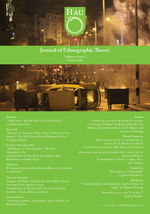 Abstract: “Cultural goods are increasingly significant under neoliberal conditions of regulatory restructuring that favor enhanced investments in informational capital in so-called “knowledge economies.” Linguistic difference, linguistic practice, and increasingly standardized genres of representation have been constitutive of new technologies of government and reterritorialization in Latin America in the last quarter-century as global policy regimes that valorize diversity have been interpreted and implemented. The argument is presented through a critical multiscalar survey of recent ethnographic research in Latin American contexts in which we can trace the ways and means through which international trade, intellectual property, and biodiversity regimes have influenced representations and management of knowledge to effect new forms of spatialization. Indigenous social collectives constituted as self-managing communities have embraced possessive, if not necessarily proprietary, attitudes toward traditional knowledge, plant genetic resources, and food sources, learning to mark goods and services to indicate culturally specific conditions of origin.  As culturalized communities become subjects of neoliberal government, however, they are called upon to project their distinctive assets so as to make them politically and economically legible to new interlocutors. This has provoked new forms of reflexivity around assets, goods, values, and norms, and new resources for rights-based struggles in an emerging field of cultural politics in which neoliberal multiculturalism is vernacularized in more embedded markets and more pluralist polities.”