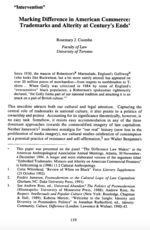 Abstract: Intellectual property laws constitute a political economy of mimesis in capitalist societies, constructing authors, regulating the activities of reproduction, authorizing and licensing copying and imitation — in the service of maintaining the exchange value of texts. The trademark can be seen as the organized legal control of mimesis in capitalist societies. The trademark maintains and garners exchange value in the market, functioning as a tool of capital accumulation. In the late nineteenth century trademark laws became for the first time federal ones in markets recognized as national, and in the United States a particularly American consumer needed to be constructed to foster a burgeoning economy. Somewhat unsurprisingly, in precisely the same period we see preoccupations with the frontiers of civilization and the containment of the primitive. Early forms of othering and governmentality were at play in service of identity-creation and or exclusion, as well as advertising towards the creation of consumer markets. In the late twentieth century, we witness the politicized responses of those othered by those late nineteenth-century. The problem, as we shall see, is that for many peoples, their own representations are often legally owned by others, as properties protected by laws of intellectual property.