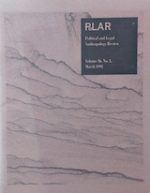 Abstract: Debates over cultural appropriation are drawn out in multiple ways by a variety of actors. Some have used cultural appropriation to denote the practice of white elites stealing the cultural forms of minority groups for their own profit. In struggles for political representation, debates over cultural appropriation are grounded in colonially-rooted liberalism and orientalism which are often overlooked or taken for granted in such debates. Romantic notions of the individual author are oblivious to historical and current asymmetrical power relations when claiming a liberal freedom to expression. Legal domains of property offer two visions of culture, neither of which corresponds with Native visions of self-empowerment: the notion of the Romantic author whose work cannot be copied because of its unique expression and cultural property laws that enable collective entities to take control of material objects that fit into a singular notion of ‘culture.’ However, there is a subversive element to cultural appropriation that can be utilized by First Nations peoples; the Aboriginal Title shows how the use of the language of political liberalism can be used to undermine the colonial infrastructure upon which economic liberalism is built.