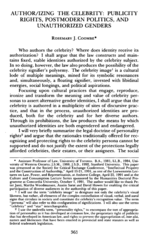 Abstract: The celebrity image is imbued with multiple meanings, mined for its symbolic resonances and, simultaneously, a floating signifier, invested with libidinal energies, social longings, and political aspirations. The celebrity is authored in a multiplicity of sites of discursive practice, generating unauthorized both for the celebrity and for her diverse authors. The law produces the means by which unauthorized identities are both engendered and endangered and existing personality rights do not justify the extent to which these rights are protected. Various examples are explored, showing how subaltern groups rewrite media imagery in subversive but politically expressive fashions. These practices function in an all-encompassing contemporary democracy that recognizes-as political practice-dialogic cultural activities of articulating the social world and authoring politically salient forms of difference.